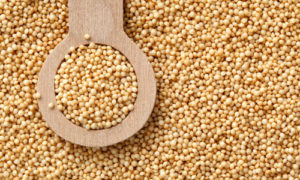 We can offer you superior quality of Amaranth Seeds with 99.9% purity. Amaranth has broad leaves and large flower heads that produce thousands of protein-rich seeds. Amaranth seeds are tiny yellowish and round. Amaranth contains three times more fiber than wheat and five times more iron than wheat.

Its unique nutritional properties make it a grain with many applications in the food industry. It can be used in preparation of multi grain cereals, health foods and high-energy granola bars. Amaranth can be puffed (like tiny popped corn) or ground into whole grain flour.

AMARANTH GRAIN IS A ROYAL GRAIN 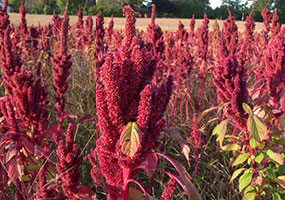 The name for amaranth comes from the Greek amarantos, Amaranth is an old cultivated crop originating on American continent. The Aztecs, Incas and Mayas considered amaranth as their staple food together with maize and beans. Amaranth was first introduced as an ornamental plant in Europe in the 16th century. Different species of amaranth spread throughout the world during 17th, 18th and 19th century. In India, China and under the harsh conditions of Himalayas this plant became important grain.

AMARANTH HAS BEEN CULTIVATED AS A GRAIN FOR 8,000 YEARS.THE YIELD OF GRAIN AMARANTH IS COMPARABLE TO RICE OR MAIZE. IT WAS A STAPLE FOOD

Amaranth can be used for bread, pastries, or can be popped like corn. When used in combination with corn, wheat or brown rice becomes a complete protein as high in food value as fish, red meat or poultry. We exports conventional & organic Amaranth seeds to several countries like USA, UK, Australia, Canada, New Zealand and many more

Amaranth contains more than three times the average amount of calcium and is also high in iron, magnesium, phosphorus, and potassium. It’s also the only grain documented to contain Vitamin C. Very little research has been conducted on amaranth’s beneficial properties, but the studies that have focused on amaranth’s role in a healthy diet have revealed three very important reasons to add it to your diet.

Get in touch with us